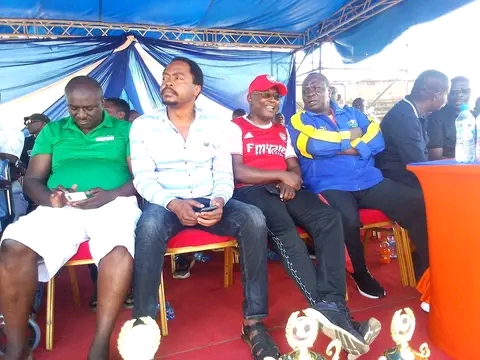 The winners of the Azimio Cup football tournament bagged themselves handsome prizes at the sport event that went down at the Makongeni Grounds in Makadara Constituency.

The Tournament was sponsored by Majority leader Peter Imwatok who applauded the Makadara community for turning out in large number to participate in the tournament.

“We want to thank the members of the community for gracing this ….and it is a sign of unity and love when we come together and play…the Azimio tournament is unifying factor which has no political boundary let us embrace it.” He said.

Hon. Peter Imwatok referred to the event as the perfect space for budding talents adding that he would be offering full support to the youth.

“To our youths this is our opportunity to nature your talent..and we will support you.” He said.

Hakati Sportif from Hamza edged out Makongeni’s Uprising 4-2 in the Main Cup, bagging themselves Ksh. 100,000, medals, balls and a trophy.

For the Wazee Cup, Kaloleni Wazee earned the first spot having beaten Michezo Halisi fc from Mbotela by 1-0.

The winners of the Wazee Cup also took home Ksh.25,000 and a trophy.

The third place was won by 1000 Sportif bringing Buy Shoes Fc to fourth place through penalties (5-4) after a draw of 1-1.

No.3 received 50k,a trophy,medals and balls as No. 4 buy shoes Fc received 25k,a trophy and balls.