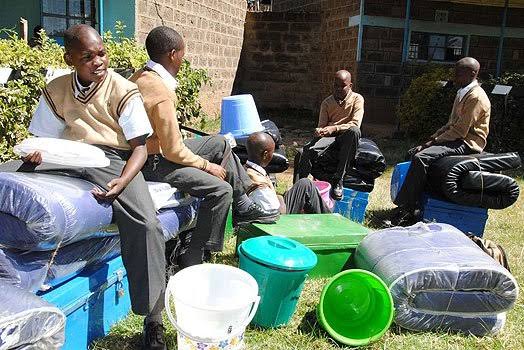 A class eight pupil has opted to sell rabbits to raise funds for joining form one in Homa Bay.

The 14-year-old class eight pupil from Akele Village in Kanyabala Location, Homa Bay Town constituency opted to sell six rabbits within Homa Bay Town in order to raise funds to cater for his school fees and other requirements to join form one this morning.

Luice Otieno who sat KCPE at Akele Primary School walked several Kilometres from his parent’s home in Kanyabala with intention of selling the rabbits in Homa Bay Town to get funds that could allow him join form one at Ruga Secondary School in the neighboring village.

The minor who was accompanied by his younger brother was sent by his father to sell the six rabbits in the town and gave him a shopping list containing requirements in the calling letter which he was to buy after selling rabbits.

According to the boy, his father bought four rabbits from a farmer in the village and took other two rabbits he reared so that he could get fund to support his secondary education.

However, Otieno was unlucky after failing to get customers to buy the rabbits even after spending more than eight hours in town forcing bodaboda riders to rescue him when he broke down in tears.

The pupil narrates that he received calling letters from Wiobiero and Sero Secondary school but he opted to join form one a local school due to lack of school fees.

He has appealed to well wishers to hep him raise school fees and buy other school requirements so that he can report to school to realize his dream in future.