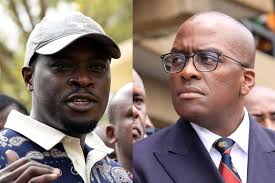 Azimio gubernatorial candidate Polycarp Igathe is now in a panic mode after realizing that he is poised to lose in the August 9th Elections.
According to sources he rung Azimio presidential candidate Raila Odinga seeking help.
Odingas’ close aide revealed that he was dismissed.
“It’s true he called yesterday on our way to Kisumu trying to explain to Babab situation on ground and how things are difficult but he was told to search for votes.” he said.
Igathe has also slammed research firms that have placed Sakaja ahead in the race a clear indicator that he panicked long time ago.
Latest research poll by TIFA places Sakaja ahead at 53% followed by Igathe at 36%.