Boost for local Tourism as German Flight lands in Mombasa 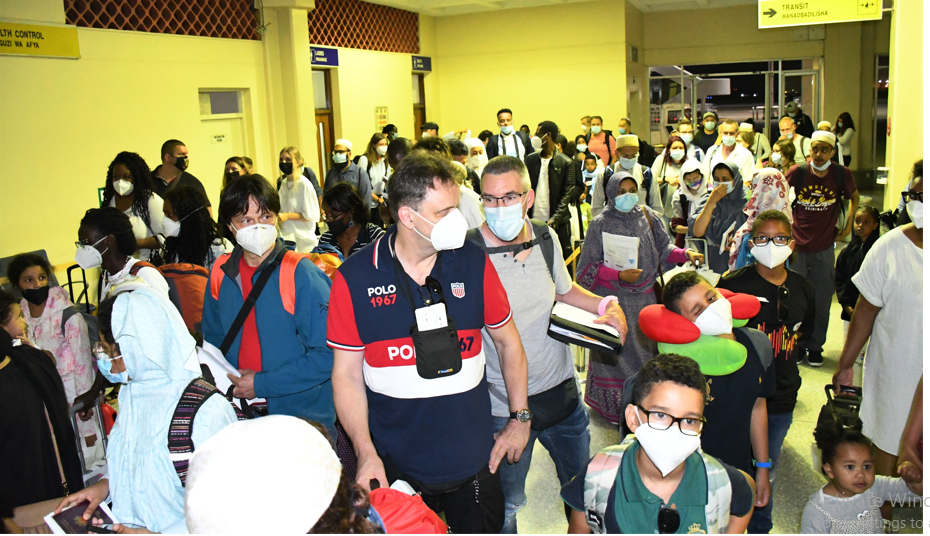 The tourism industry in the coast region has recorded a booming business after the Eurowings Discover, which is a sister company of the Lufthansa Group, made its maiden flight into the country.

The inaugural flight from Frankfurt in Germany arrived amid tight security with 158 tourists with 140 others being on transit to Zanzibar.

Local traditional dancers from Bombolulu Cultural Centre were at hand to entertain them as they arrived on the wee hours over the weekend.

The arrival of the airbus from Germany brought business at the busy airport to a standstill with airport staff struggling to take photos of themselves on their mobile phones and to get a glimpse of the aircraft.

Department of Tourism Principal Secretary Safina Kwekwe led top government officials to receive the visitors who arrived after nine hours of a direct flight from Germany despite the chilly morning weather.

Speaking during the arrival of the tourists for the first time since the outbreak of the COVID-19 pandemic courtesy of the Kenya Tourist Board [KTB] and Magical Kenya, Kwekwe said Kenya is still a magical destination.

She lauded the airline for choosing Kenya for the inaugural flight which was also destined to Zanzibar adding that this is a pointer to a brighter future in the tourism industry.

“This arrival of the aircraft makes Kenya the first to receive an inaugural flight by an airline,” she pointed out.

The Tourism Principal Secretary told journalists during a media briefing at the Moi International airport in Mombasa county the government is happy to be the first among the first.

Kwekwe reiterated Germany remains the country’s key source market in the tourism and hospitality sector prior to and after the outbreak of the pandemic.

She pointed out Germany was numbers six in the incoming traffic of tourists with the inaugural flight arguing that she is optimistic the European country will climb the ladder.

“The inaugural flight is Germany’s endeavour and undertaking to climb to the top three positions in the ratings,” she pointed out.

The Ambassador of the Federal Republic of Germany to KenyaMrs Annett Günther described the arrival of the international flight as a historical event despite the global challenges posed by the outbreak of the pandemic.

She pointed out the inaugural direct flight is testimony of good economic relations between the two countries apart from the arrival of the tourists.

“The tourists from Germany who landed on the Kenyan soil have decided to stay,” she pointed out.

Kenya Airport Authority [KAA] Managing Director Alex Gitari applauded the arrival of the inaugural flight saying the government is delighted to receive the airline in the country.

He pointed out the arrival of the flight is great favour in terms of promoting international business while also promoting the sector in the region.

“We extend our warm welcome to the tourists who have arrived in the country,” he said.

Speaking on behalf of KTB, the company secretary Allan Njoroge said they wish to see the airline prosper and refuted claims they are not prepared in measures to contain the surge of the pandemic.

On his part, Eurowings Discover commercial company officer [CCO] Helmut Woelfel told journalists it’s the first time for the airline to jet into the country.

He said they have plans to increase more scheduled flights due government efforts to recover after the outbreak of the pandemic in the continent.

“The agenda of the inaugural flight is helping tourists discover attractive centres in Kenya and in the region at large,” he pointed out.