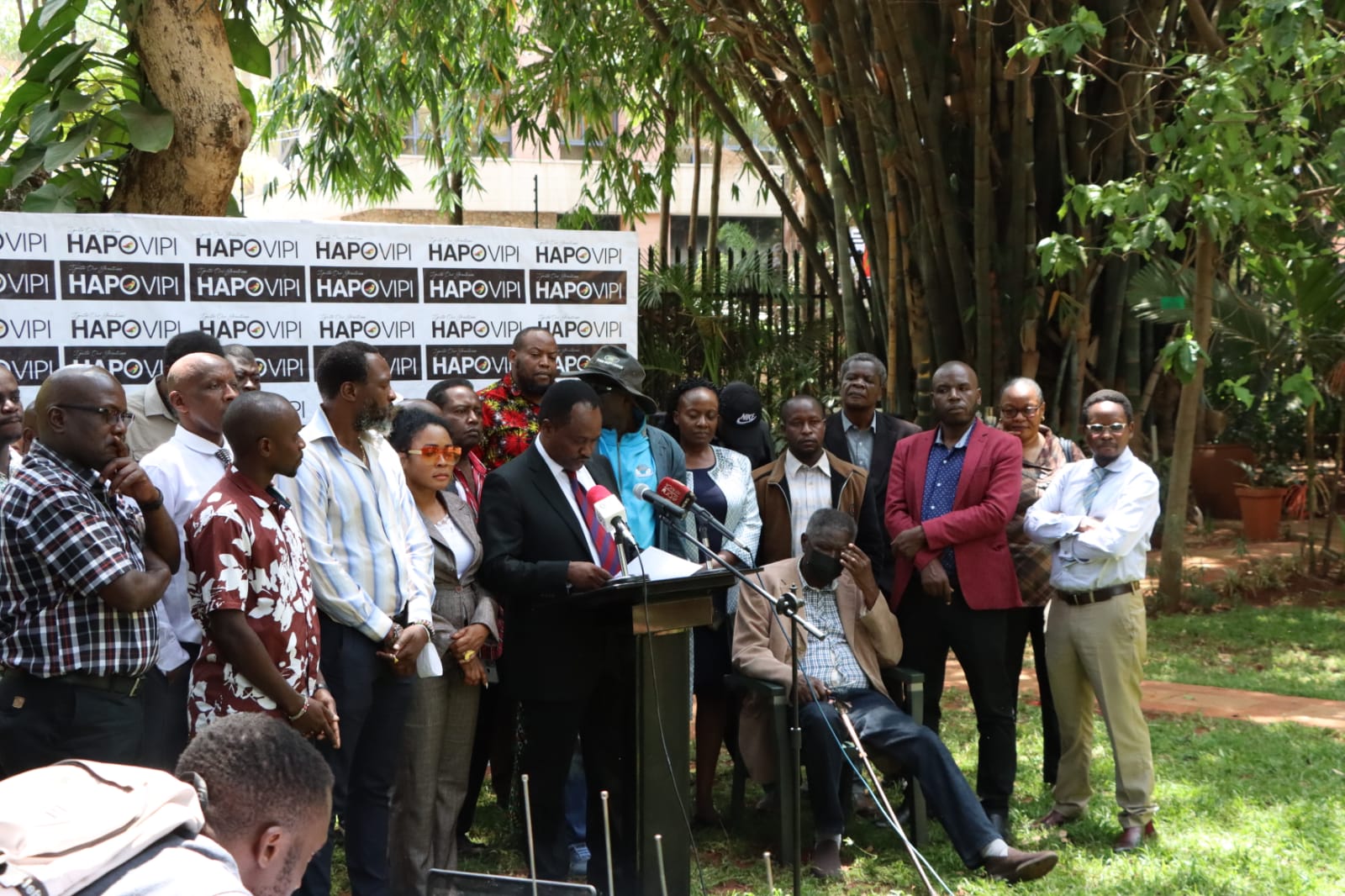 My fellow Kenyans, Ladies and Gentlemen, if you look down, you will be oppressed, if you look around, you will be depressed and if you look up, you will be addressed. We are gathered here, over 30 political parties, together with our movement as patriotic Kenyans carrying a burden of our beloved Nation.

This is not only a defining moment, for our Nation, but also Theologians will tell you it’s a Karios moment. Karios moment by definition is a moment that you witness a Dramatic shift from the normal trajectory of how events take place, and this can only happen and be achieved by the Hand of God.

My name is Steve Mwangi, the founder of Hapo Vipi Movement, registered under the laws of Kenya as a Company limited by Guarantee in June 2017. I am but a very ordinary citizen who lives in Kawangware.

I wake up to the real face of Kenya every morning, but I believe we have the capability to achieve extra ordinary results. Last I checked, I was a member of Kanu in 2002 although I have supported and voted for Raila Amollo Odinga since then because of his reformed mindset and his ability to not give up. Dr. William Ruto is showing the same zeal and vigor, and I am impressed. Our sole purpose for starting this movement was to unite Kenyans.

Our biggest achievement so far was the handshake between the President and the former Prime Minister. And although we initiated this process and carried its vision we were locked out of what eventually came out of it which was the Building Bridges Initiative (BBI). However, what will never cease to change is that the carrier of the vision knows how it commences and how it will end. As a matter of fact, God never gives a vision to a group of people, but aways to an individual. This explains why those who were mandated to conduct this process ended up doing a shoddy job with billions of tax payers’ money and the better part of the last 4 years almost going down the drain. However, “it’s not over until the fat lady sings” so  the saying goes.

The Supreme Court of Kenya is yet to pronounce itself. This tells us that there is a glimmer of hope in the horizon, no matter how remote.

The Political Parties gathered here, are headed by men and women who are law-abiding citizens. They individually have party constitutions that are inextricably linked to the constitution of our land and they have sworn to abide by it. We as a movement on the other hand, are hope peddlers and still believe we can work together as a Nation; the citizens, the legislator, the judiciary, and the executive- and have a referendum that will change our current laws so that they just don’t work for some of us, but for all of us as a People.

Under our current Constitution, we must have elections on the 9th of August and our current President must hand over power to a new Government.

Formations have been formed and basically the die has been cast.

In this year 2022, we will have a contested election… period.

None of the formations will accept the results of this election. These years ‘elections, unlike the previous years under the multi-party Democracy Era, we are dealing with a monster of a class war which has no definite boundaries. Anybody can be a hustler; anybody can be a dynasty depending on who you ask. Our youth have been radicalized and because we as a Nation created a youth that has nothing to lose that also feel helpless and hopeless, the contested election will be messy and bloody.

The Head of State and Commander in Chief will have to take action of the situation at hand when that happens. Those who will care to observe, will see that he is well prepared for such an eventuality. He will bring in the military to try and restore order under Martial law which is his Constitutional right and mandate as the President.

This is when it will go South. Our men and women in uniform and with arms, live under the current political discourse. They are our brothers, and they are our sisters, and  they are part of our families. They will take sides….period.

This means for the second time in the history of our nation, we will have our military in the streets with citizens who cannot defend themselves. Whereas during the first time this ever happened, which was the attempted coup of 1982 when Kenya was a One-Party State and the loyalty was to one Commander in Chief, the advent of multi-Party changed the dynamics completely. Their loyalty this time will be decided by their tribal affiliations, their class considerations and for the first time in the history of our Nation, the monstrous head of religion will glare its ugly head. That means a religious war will be part of the matrix.

Apart from our Military, the 2010 Constitution also enhanced further our ethnic challenges, and in the event of solving this chaotic situation, our beloved President will have to bring together 47 governors to agree in a negotiating table, a situation which will be almost impossible to achieve.

My fellow Kenyans, after these elections, therefore, brace up for a long, messy, and bloody chaotic period. Every generation is called upon to stand up for their country. This is our moment; this is our Time…

How did we get here?… I’m glad you asked…

Let me try and give you a brief history of how we got here… because if you don’t understand this history you will not understand the mess we are in.

Democracy is a Greek methodology, not divine and certainly not African. The Greeks believed that a leader should have certain traits, for example, you should have a certain skin pigmentation, sharp nose, thin lips, good oratory , a known linage etc. With these traits, they assumed the gods had chosen you. They didn’t ascribe to what we believe in, that we are fearfully and wonderfully made in the image of one God.

This Greek methodology was later adopted by the Roman Empire which was the biggest Empire to ever grace the world. Nobody could ever bring it down, they self-destroyed themselves through corruption and immorality. Out of the 14 Caesars, 12 were homosexuals. After they disintegrated, most of the European countries emerged, the British, French, Spaniards, Portuguese etc. Fast forward in 1884, in Berlin some of these Nations, purely for economic reasons demarcated Africa and eventually colonized us.

The first scouts to come to Africa reported back and said we cannot colonize these people because their cultures are too strong. To break our cultures, they used tactics that they inherited from the Greek methodology, which was “divide and rule,” lies and deceit, and power to the highest bidder. And they were also able to convince us that  our ways are became primitive.

Fast forward, in 1964 in Addis Ababa, Ethiopia, Kwame Nkrumah of Ghana urged as to unite as one Africa before Greed and trappings of Power gets into our heads, which was still part of the Greek methodology. Although we didn’t unite, most African Nations saw the need to unite their people under the One-Party Rule, but the bug that Nkrumah had warned us about had taken shape. Because of that, the Greek methodology was re-introduced by the former Roman Empire members, who are our colonial masters, in the name of Multi-Party Democracy… and they funded it. Most of the so called “Second Liberators” and “Civil Society Groups” will attest to that.

So, my fellow Kenyans our country cannot afford to have an election this year before we define clearly who we are, what we want and where we need ,to go through a Referendum. Lots of lives will be lost.

The New Constitution must decisively tackle the following issues:

My fellow Kenyans, there are no wrongs that we have made, that cannot be fixed by what is right about us, if we put our heads together as One People, One Nation, and yes… under one Party, guided by virtues forgiveness and above all, love for one another.

When you see our current divisions…. based on tribal, ethic and even religious considerations. When you see the corruption, and the notion that certain people are destined to lead others, it is not our making but it’s a Greek methodology that destroyed the Roman Empire but that continues to spread through the nations that disintegrated from that Empire.

That’s why we too are at a brink of losing our beloved Nation like they did.

My fellow Kenyans, there is nothing new under the sun. We are just illuminating new light not existing truths…

So what must we do…? Again I’m glad you asked. We know our leaders; we believe God will be gracious enough to present us with a new opportunity to rewrite our Constitution. When this happens, these leaders must be present and stand together:

And yes, Uhuru Kenyatta- his work is not yet done. We stand here, as the voice of reason, the voice of hope, the voice of peace, and the voice of unity. And we want to tell these gentlemen, who God in his infinite wisdom have been bestowed with the responsibility to be our leaders at this moment and time, we support you, we appreciate you, and we love you. Please unite this country before it’s too late.

Together with this team of Political Parties, we wish to express our willingness to work with His Excellency, the President who holds the Key of this Vision and make it a reality.

God Bless you All.