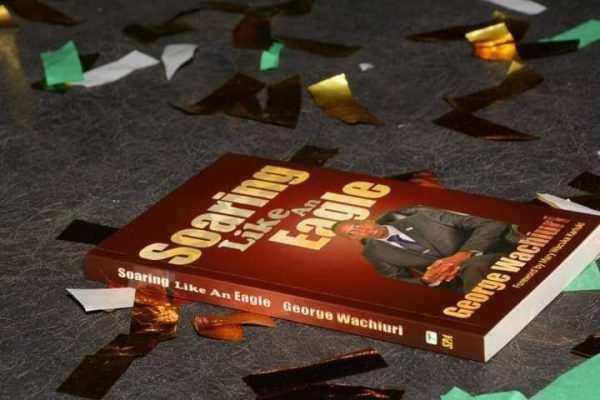 Stories of rags to riches abound in every society. Undoubtedly, such stories make for a great inspirational read be it in fiction or non-fiction material. In African literature, such tales have an evocative appeal to their immediate audience.

However, these stories usually get lost with the march of time as few Africans fail to document their journey. Moreso, biographers usually get the upper hand when trying to tell readers about the heroes of their time. Elements of bias are not far and we only get a fraction of what really happened in these individuals’ lives. Their successes usually eclipse the inner turmoil and outward struggles that they faced while growing up.

In Soaring Like an Eagle, George Wachiuri (the beloved founder and CEO of the Real Estate firm, Optiven Limited) did something that few of his contemporaries in Kenya have failed to dowriting an autobiography. This is very commendable as a majority of high flyers forget to leave a legacy of their triumphs and troubles to other generations through writing.

The memoir begins with an inciting incident and hooks the reader’s attention almost effortlessly. We are immediately brought into an unknown land- a remote village in Nyeri County called Laburra. It is here that the protagonist finds himself in deep trouble after an unfortunate encounter with a puff-adder in their dingy house as a young and innocent boy. The resounding scream that he gave was just what was required to save the lad’s life.

The author then gives us a glimpse of what transpired as a country was struggling to break the yoke of colonialism and the sacrifices that many communities in Kenya made to fight for their independence. As the country regained its soul, many opportunities were opened for the natives but a lot needed to be done. The teething problems of any post-independent country were quite apparent.Education became even more important. George’s father is then introduced to the reader as a brave teacher who later passes on after a business feud leads to a tragic ending and a tough beginning for the family that gets left behind.

George’s widowed mother is left with no choice but to raise her six children on her own. Life becomes difficult as they wrestle with the ugliest form of poverty. The story moves forward with young George struggling to understand life and his call to ministry as an altar boy.

His interests’ later change after successfully finishing his basic education and receiving admission to Chinga Boys High School and later to the University of Nairobi (UoN).

His entrepreneurial efforts and involvement with the Christian Union culminate in his meeting the love of his life, Mary. The founding of his company and being swindled of a fortune land him in depression but due to the fortitude of his wife he rises again to soar like an eagle. From wrestling with austerity to a life of affluence the author does not forget God.

The book is riddled with a rather simple diction- one that you would expect of a class eight pupil. While it would certainly have a high readability score; I expected a man of his pedigree to write at a higher level. Some of the expressions used in the book seem a bit amateur for an author.

Nonetheless, the book would be indeed entertaining for most readers.

By Jimmy Nzioki, Author: The Gift of Presence and 40 Illustrations for Public Speakers: A Story Collection Toolkit for Pastors, Teachers and Orators.