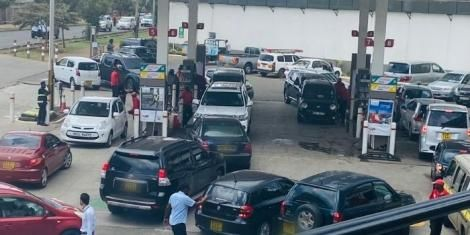 Going to two weeks now, Kenyans have continued to suffer due to lack of Fuel acreoss many parts of the Country.

The principal secretary said if all Kenyans would continue buying fuel based on their normal patterns, the shortage wouldn’t hit the current crisis levels.

Kamau said “panic-buying” was triggered by oil marketers, who sent out an alert that soon they’d be unable to ship in fuel if the government fails to pay the Sh13 billion subsidy that it owes them.

He likened the current fuel crisis to when bank customers receive information, verified or otherwise, that their commercial banks would be declared insolvent.

“I call it financial runs. Something spooks people, and they head out to their bank to get all their money.  So, what happens? You go there, and as the first person, you get all your money. When you are the 10,000th person, they say: ‘no, no, the bank is closed, we are not giving more money’. So, what happens? Another 100,000 people show up to try and get their money out of the ATM. That is what is called a run,” he said.

Commenting on the crisis, NGO Council Chairman Stephen Cheboi has urged the Government to fasten and ensure the problem is solved as Kenyans who depend on the fuel for the normal daily business activities won’t be able to.

“It is bad that the oil marketers have taken advantage of the situation. Let the government intervene and normalcy be returned,”said Cheboi.