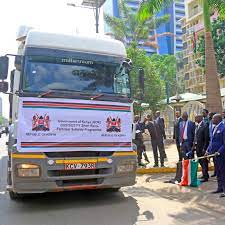 The Kenyan Peasant League has now faulted the government for investing too much on artificial fertilizer and issuing it with subsidies without considering organic farming.

Kenyan Peasant League boss David Caleb Otieno says the government is becoming unrealistic and that it can not fight Climate Change and the same time promote inorganic farming.

“We are against those artificial fertilizers as Kenyan Peasant League we want to ask the government to invest much on organic farming so that the environment is also protected and sustainability of food production is also realized.” David said.

While flagging off 2,600 bags of subsidised DAP fertiliser, Deputy President Gachagua announced that the consignment is part of 1.4 million bags of 50kg fertiliser that will be made available to farmers at subsidised prices.