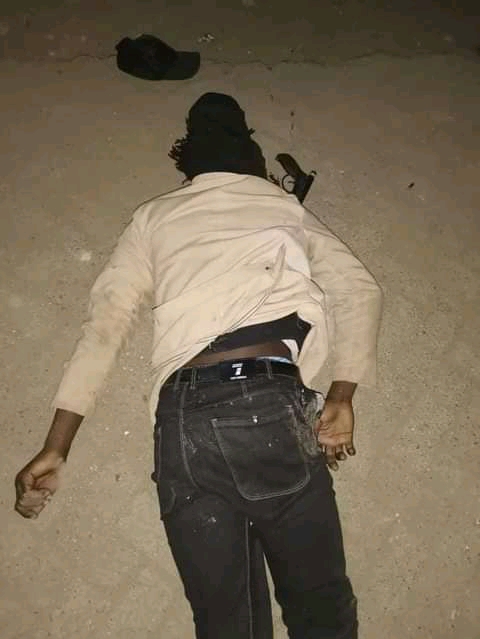 A wanted and dangerous gangster was gunned down by Police early this morning, as he led a cabal of thugs in staging attacks targeting residents living in Dandora within the capital city.

The gun toting thug only identified as Fidel, who was the ringleader of a miscreant gang of 5 met his death in a hail of fire from our agents, after he defied orders to surrender and opted to test our resilience by firing at the fast approaching crime busters.

Fidel who has been engaging our men in a cat and mouse game for a while, was finally cornered at Joy Villa in Dandora, shortly after staging a robbery along Mwas road.

Preliminary investigations and intelligence analysis had connected Fidel and his gang to the spate of attacks that have rocked Nairobi’s eastlands suburbs in recent days, targeting innocent civilians. It was just a matter of time before the long arm of the law caught up with him and brought him to justice.

A firearm and two rounds of 9mm callibre, were recovered from the thug following the operation mounted in the wee hours of today morning. Two other thugs who were with Fidel at the time of the incident, were lucky to escape the onslaught alive but with their bodies riddled with bullet wounds.

Our Dandora based crime busters are on hot on their trail. Meanwhile, one more robbery with violence criminal was fatally wounded in Githurai, as police intensify a crackdown on illegal gangs terrorizing city residents.

The gangster who was armed with a pistol was part of a six-man gang that was robbing pedestrians off their valuables, at the Githurai bridge along Thika superhighway. Officers who were on routine patrol along the busy highway last night, were responding to distress calls from members of the public when they cornered the thugs at around 9:30pm.

As five of the thugs took flight to the nearby Majengo settlements to evade arrest, the fatally wounded gangster opted to challenge the marksmanship skills of our agents by firing two rounds from his browning pistol. That miscalculated move, sealed his fate.

The Kasarani based detectives responded decisively, killing him on the spot.

Crime scene personnel based at Kasarani documented the scene and handed over the recovered pistol to ballistic experts at our headquarters, for further examination.

Crude weapons including machetes and swords that were left behind by the fleeing miscreants were also recovered. Bodies of the dead gangsters were moved to City mortuary pending identification by their kin.