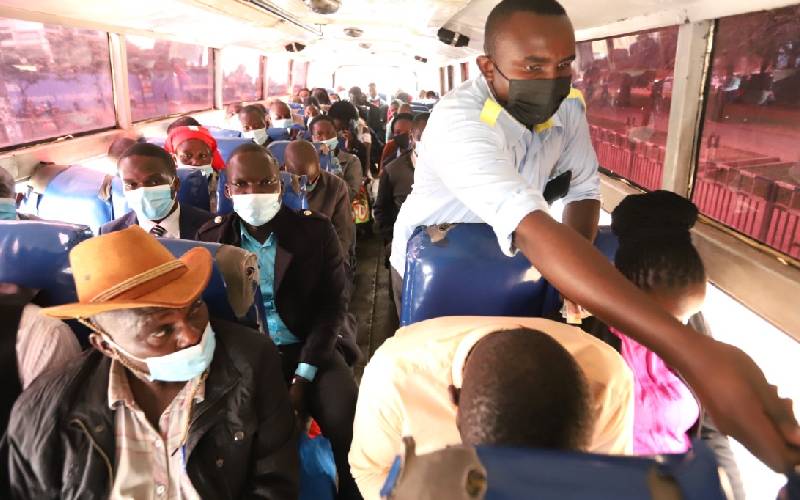 A section of paseengers have welcomed the new directives by the government allowing public transport sector was allowed to carry full capacity as it will ensure bus fare charges are lowered while others are against the move by the government alleging that Covid-19 pandemic would cause further damage to the economy and individuals as there is a sudden surge in positivity rate.

Speaking to the press on Tuesday, the chairperson Association of Bus Operators Kenya, Mr Edwin Mukabana has urged passengers together with bus and Matatu Operators to observe measures put in place to prevent further transmission of the dreadful Delta variance which spreads through the air.

He said all public vehicles should be fumigated every evening after operarion of the day and when full to open all windows to allow circulation of air.

“Last week we had a stakeholders meeting together with the CAS Ministry of Transport and Infrastructure Christopher Obure and we were glad to be allowed to carry full capacity. I hereby want to retaliate that companies and SACCOs violating the measures put in place to prevent spread of Corona Virus will have their licenses revoked,” he said.

According to the Managing Director Easy Coach, Mr Azym Dossa, they have lost over Sh.100 million since the 60% per cent rule was put in place by the ministry of health in order to stop the spread of the viral disease after the first case was announced in Kenya in March 2020.

He said they are currently facing the challenge of customers shifting to other service providers as they didn’t embrace the full capacity initiative basing on the daily increase of positive cases in the country while some other passengers expected immidiate decrease on fares yet fuel prices are still high.

“When we held the stakeholders meeting together with the CAS Transport on Friday last week, we also expected to be allowed to carry at night which was turned down. Intercounty operators have been hard hit by the pandemic as the airplanes and trains have been allowed to operate at night,” he said.

He also urged bus and Matatu operators together with passengers to be extra vigilant in observing the measures set to curb further spread of the pandemic.