Machakos Rural Village Benefits in Diagnosis and Treatment By Hepto 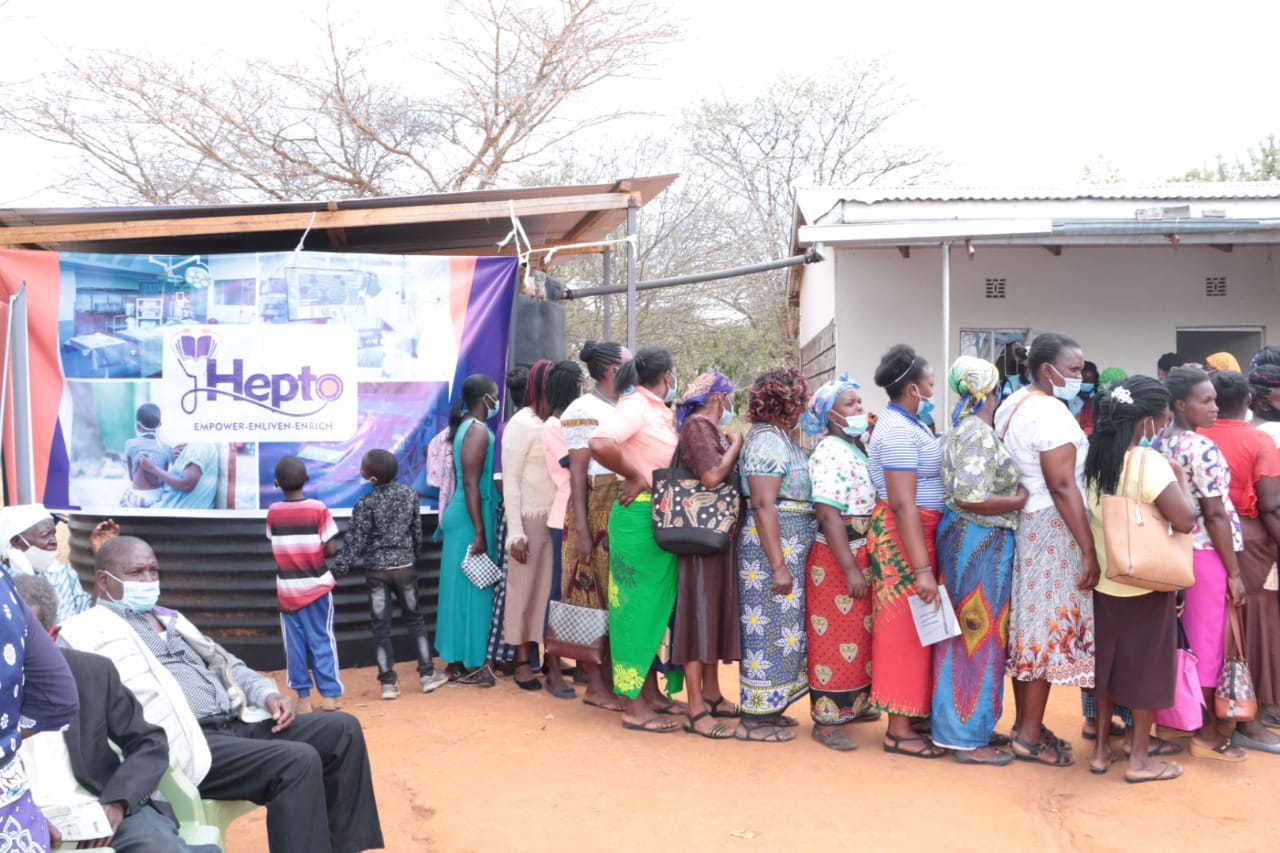 The morning sun in the remote Mukusu village on Tuesday, March 22 streaked across homesteads with rays of light calling on residents to wake up to a day filled with great hope and anticipation to an otherwise sleepy village tucked in the far end of vast Machakos county.

By seven o’clock that morning, trails of footprints could be seen heading in the direction of the Mukusu dispensary located next to the village shopping center.

This was the location where Hepto, a non-profit medical organization based in the United States of America was holding a free medical testing and treatment outreach for the poor majority in the area.

Mothers and their children sat waiting in the cool of the shade as the medics, consisting mainly of doctors, nurses and community health volunteers drawn from the county government of Machakos finished preparations for the big day in the sun-baked village, while old men with walking sticks sat on hired plastic chairs outside the facility.

At about 10 am the outreach coordinator Halima Adan Ahmed, who is also the Director of nursing in Machakos county arrived with a track-load of medicines and an assortment of personal protective gear.

The county minister of Health and emergency services Dr. Ruth Mutua and her entourage arrived a few minutes later to a rousing song and cheers from the waiting residents. She was also joined by Madam Caroline Koki Musembi, nominated Member of County Assembly, and a host of government administration officers –including the area chief and his assistant.

“It is a great day to be gathered here this morning. I know so many of you have trekked long distances to come here, so many others came carrying children and these respectable wazee (old men) slowly walked here supported by walking sticks. I am so glad to see you all here,” the county minister said in her opening remarks.

“Our partners who are a non-profit organization that is based in Minnesota, USA have sent their representatives here to come and help our community by donating medicines and other items that will go a long way in treating the sick people amongst us here today. On our part as the county government, we have deployed staff, both doctors and nurses supported by community health volunteers in this area to help make this day a success. It is a great honor to partner with Hepto and I take the opportunity to welcome them to Machakos and thank them for this wonderful program,” she said.

The Masuku dispensary serves about 6000 locals, however, on this day 360 residents were tested and treated for various conditions and diseases.

“The selflessness exhibited by area residents, healthcare providers, and Hepto must be appreciated,” said the nursing director Halima Adan after a day-long exercise of testing, treatment, and vaccination for different people and cases.

“We have reached 360 outpatient clients who were treated and given medication with 60 being screened for breast cancer, 82 clients were given Covid-19 vaccine doses, 38 were screened and laboratory tests conducted for malaria and diabetes,” Halima said.

Many children who had been brought in by their mothers also received medical attention.

The outreach however could not reach the needs of everyone who had come as 70-year-old Moses Muinde stated that he had hoped to receive prostate cancer services but was however unlucky.

“I have been vaccinated against Covid-19 and I appreciate because of that. I was hoping to be examined on prostate cancer which did not happen. I request the organizers of this activity to consider that next round,” he said.

Hepto representative Mohamed Ahmed assured Mr. Muinde and many others that plans were in place to conduct similar outreaches in the area and outside in the future and that more cases will be handled.

“We plan to expand our programs to cover surgical medical camps and donate advanced medical equipment to health centers that are in dire need in Machakos and outside,” he said.

“Further, we will work together with the county government to provide training skills and knowledge to local community health volunteers who are spread across the county,” he added.