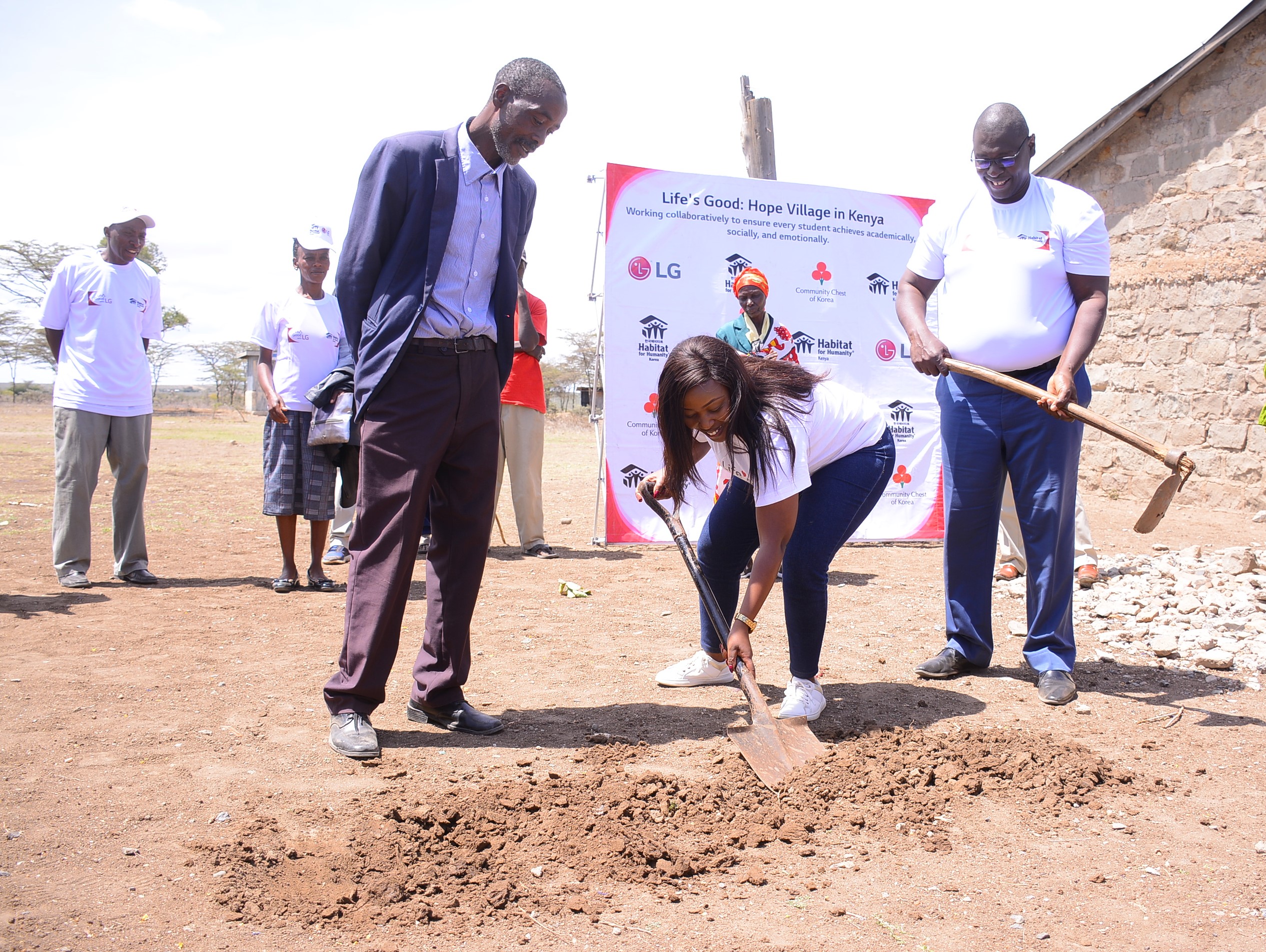 •Atleast 229 pupils from Shiloh Naibor primary school will benefit from the new classroom, two 10,000-liter water tanks and 2 toilet blocks with 4 doors each as part of the improved sanitation to serve the entire school population.

•HFHK through the vulnerable group housing program will transform the living condition and access to the security of tenure for 7 families (35 individuals), by building a new home and improving six others alongside access to sanitation and safe water.

LG Electronics in partnership with Habitat for Humanity Kenya (HFHK) has today conducted the groundbreaking ceremony of infrastructural facilities for learning and safety, water, sanitation and hygiene set to benefit over 260 residents of Segera Ward, Nanyuki in Laikipia County.

Scheduled to run for the next 10 months, the partnership between the two organisations is aimed at Improving Learning and Housing conditions for Naibor Community in Laikipia County which will comprise 229 pupils of Shiloh Naibor Primary school in Segera Ward and an estimated 35 individuals from 7 families.

The project follows a successful rollout of Kes 10.3 million social impact activities by the two organisations rolled out last year that saw over 25,000 residents from the county benefit from product donations, construction of classrooms and ablution blocks.

Speaking during the groundbreaking ceremony held at Shiloh Naibor Primary school, LG Electronics East Africa Corporate Communications Manager Maureen Kemunto said, “We are more than excited to continuously partner with Habitat for Humanity Kenya in line with our pursuit to offer everyone an opportunity to live a better life that they deserve. To favorably impact the learning environment and overall quality of life of these residents is a privilege we embrace and commit to seeing through to the end as a viable investment in the future of this community at large”

Located in a predominantly rural area, Shiloh Naibor Primary school is only served by one 10,000-liter water tank and as a result, students have to carry water from home to bring to school. Besides, the school has poor hygiene conditions due to a lack of adequate pit latrines leading to overcrowding of the available facilities. The available toilets are also sinking due to the poor soil condition that they were built on, posing a risk to the student community.

“Lack of separate, decent and adequate sanitation and washing facilities for adolescent girls in Naibor discourages them from attending school during their menses which in turn affects their school performance and increases their risk of dropping out. The school’s classrooms are quite dilapidated with one of the classrooms for grade 8 pupils having collapsed due to structural failure. This even as the condition contributes to a low enrolment rate over the years and a low performance compared to the national average (500). Currently, the average mean grade performance is 223 out of the possible 500 marks.” Said Shiloh Naibor Primary school deputy headteacher Mr. Joseph Komu.

As part of the solution to these challenges, LG Electronics and HFH Kenya will construct one new classroom that will serve approximately 50 students each school year using low-cost technologies, and two toilet blocks with four doors each for boys and girls during the project duration. This is aimed at significantly improving the attendance of the girls who fail to attend school when on their menses due to a lack of proper and separate sanitation facilities. In addition, the two will also Install two 10,000 litre tanks for rainwater harvesting to benefit the 229 pupils.

Giving his remarks on the partnership, Habitat for Humanity Kenya National Director Anthony Okoth said, “This project is a display of possibilities to drive the hope agenda, strength, stability and even self-reliance which is what we live for at Habitat for Humanity. We are thankful to our partner LG Electronics for coming on board to not only offer long-lasting impactful solutions but also build hope among the transformative agents of the future”.

Besides the school, this partnership will also see an estimated 35 individuals from 7 families benefit from home improvements. As part of the interventions, the two organisations will oversee the construction of 1 home using low-cost technologies, and 6 New latrines for both the new houses and the Home Improvement. They will install 6 water harvesting systems for 6 homes for both New Home and HI, 6 homes improvement through the repair of the roof, floor, doors and windows and Install 6 solar-powered home lighting systems for 6 vulnerable beneficiaries.

“Having access to quality affordable housing is fundamental to reducing poverty, improving equal opportunities and guaranteeing sustainable growth. Besides, apart from the economic perspective, affordable also means physically adequate and fit for human habitation: for this reason, as HFHK we are excited that this project will transform the living condition of 7 vulnerable beneficiaries by providing access to decent shelter through the construction 1 new home and the renovation of 6 existing houses”. Said HFHK National Director Anthony Okoth

The project is expected to close by June 2023 and be handed over to the respective beneficiaries.