Kenya Orient Feted for its Marketing Campaign Of The Year 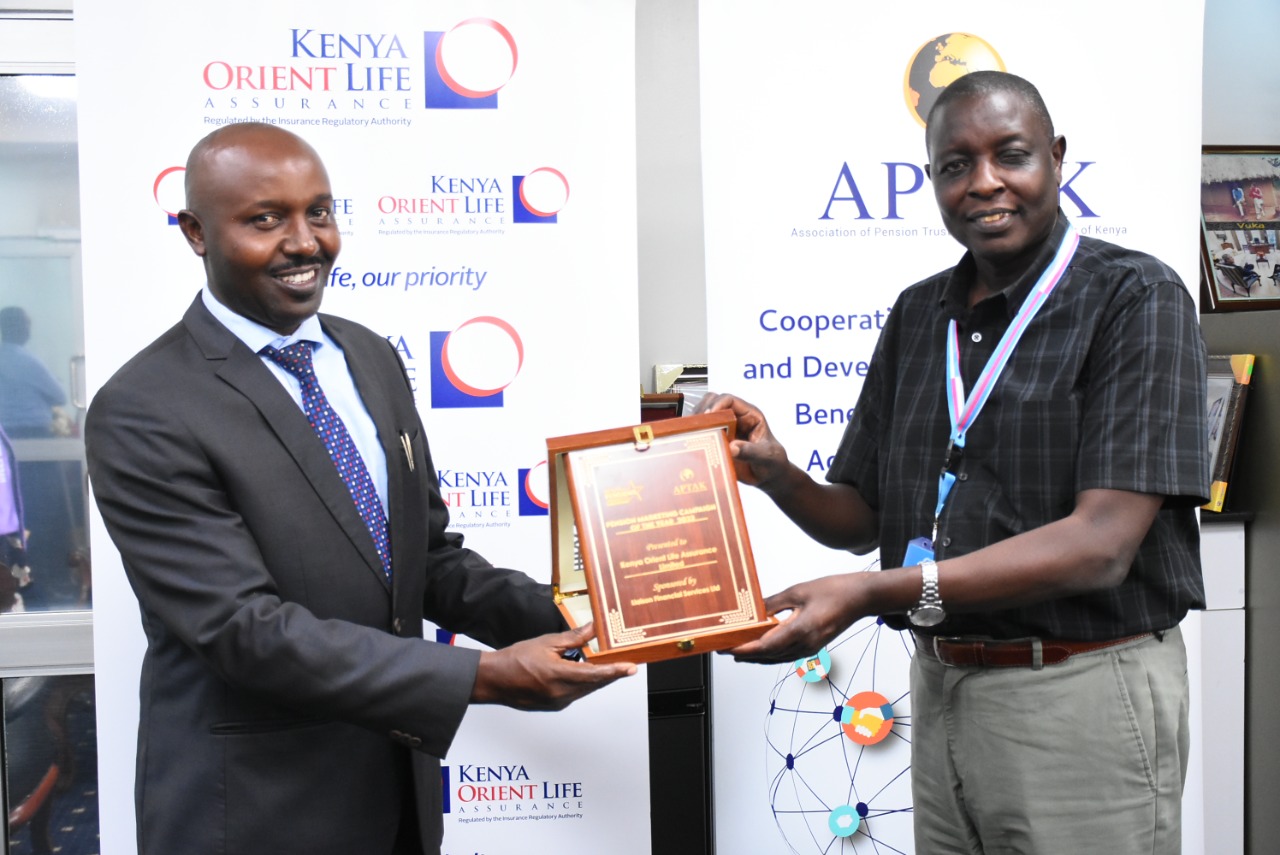 Kenya Orient Life Assurance Limited (KOLAL) are the winners of the 2021 ‘Pension Marketing Campaign of the Year’ award in recognition of the firm’s effective social media marketing campaign on the individual pension plan geared to boost the uptake of personal pension products.

The digital campaign, dubbed ‘Get the pension that works as hard as you do’ addressed hard working Kenyans with an intrinsic drive to build their careers. The campaign acknowledged this consumer insight and positioned the offering as a pension scheme that ‘does the heavy lifting just like you do’.

The awards, hosted by The Association of Pension Trustees and Administrators of Kenya (APTAK) in partnership with Brands and Beyond, awarded the life insurance provider in the marketing campaign category due to its highest level of innovation, performance and services to customers on the individual pension plan over the past year.

While receiving the Award, Kenya Orient Life Assurance General Manager Jackson Muli said the firm’s mandate is to demystify pension products which are usually misinterpreted to mean that saving for retirement seems a long way away and waiting for “right time” to start saving.

“The ‘Pension Marketing Campaign of the Year Award’ is timely as we continue to create awareness on the pension schemes so that the public can understand the significance of saving as early as possible in a bid to secure their future. People should invest in a plan that specifically matches their needs so that later on, it would help make a smooth transition from work to retirement,” said Muli.

“Our digital campaign at KOLAL was aimed at demystifying the jargons associated with Pension Schemes to a target audience of 28 to 40 year olds, who are upwardly mobile and digital-first consumers. The campaign resonated with the audience, affirming their ambition and drive, while educating them on the value of starting early. We took them through one of the easiest sign-up processes,” Muli added.

At the onset of COVID-19 pandemic, there was over-reliance on digital platforms for information and communication due to movement restrictions by the Government to curb the spread of the virus. Kenya Orient Life Assurance leveraged on the digital platforms to increase awareness of the products, responding to customer enquiries to provide guidance on how to be policy holders and make informed decisions. This increased the brand’s visibility on the individual pension products and other products offering.

“When you begin investing now, the more secure and safer your future will become. Starting early also has the advantage of having to make contributions towards the pension plan much less later on. The small sacrifice you make today will make a huge difference tomorrow as it brings a sense of security during your old age.”

He added that while there is a lot of misconception due to lack of access to information, it is important for the public to seek advice from qualified pension providers before making informed decisions on the type of plan to take, advising that pension plans are formulated on different scales depending on one’s preference.

APTAK President Hosea Kili commended Kenya Orient Assurance Life for winning the coveted award and setting the pace in being the best achievers to bring out desired changes in Africa’s pension industry.

“Congratulations to Kenya Orient Life. Your work in enhancing access to information on pension schemes is vital in encouraging people to take greater responsibility for their financial future. The aim of the awards is to recognise the highest level of innovation, performance and service to occupational pension schemes and their members,” said Kili.

The pension coverage in Kenya currently stands at 22 per cent, according to the Retirement Benefits Authority (RBA). About 17 million Kenyans, mainly in the informal sector, do not have any form of pension. This is attributed to insufficient public awareness about pension and a poor savings culture.