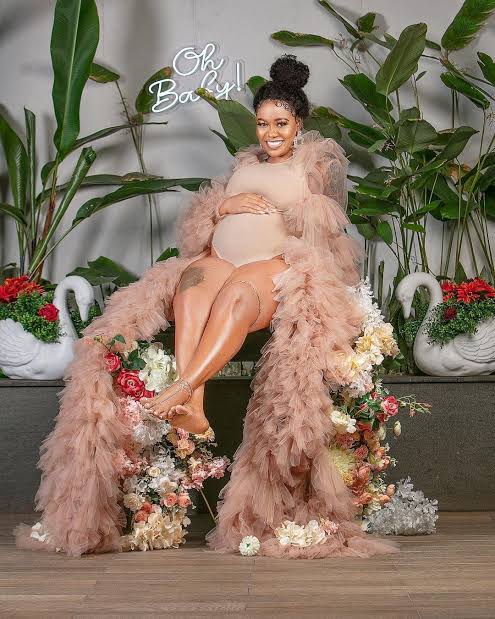 From the photos and videos shared online, luxury and affluence could be seen in all white party.

It has emerged that she held an expensive party that she could not ‘afford.’

Comedian Akuku Danger has accused Vera Sidika of failing to settle all the bills for the party.

Akuku provided sound system for the event, but vera has not settled the bill and has gone missing in action. She is not Picking Akuku Danger’s phone calls.
The Comedian posted a long text on his Instagram page, asking Vera to pay the remaining Ksh 5,000 owed to him.

He wrote;
“Vera Sidika pay your service providers. For some of us it’s the ‘small money that makes a difference in our livelihoods. I’m kindly asking you to pay me my balance of 5,000/= Which rightfully belongs to me!
So this is what happened. Yesterday Vera called me 30 minutes to her gender reveal party to provide her with a Sound system for 1hour. We agreed on 15k. She sent me a down payment of 10,000/= and promised to pay the balance when the sound system gets to the venue.
We got there albeit 10 minutes late, it was short notice and we did all we could to be there in time. We got there by 7 Pm and did the setup by 7:10 Pm the event started.

Upon finishing my end of the bargain which was at 9 Pm I asked for my balance Only for her to now assume she doesn’t know who we are and instead sent a team of bouncers/Security, A group of her already drunk Lady friends and some guy by the name Victor to whisk us away making all sorts of insults at us. All this while she is standing there pretending to be on her phone.
By Now it was already 1am in the night Mark you we had finished packing up by 9 Pm. All this while we kept asking for the balance and she was like ” Wacheni nimalize photoshoot kwanza I’ll sort you guys out, 5k ni pesa ya kunisumbua every now and then) we were patient.

By 1am We couldn’t take it anymore and that’s when she sent her drunk girlfriends and Security to get us out with a promise of “She’ll see what to do in the morning” Till Now she ain’t picking my calls or returning my texts.

Vera, trust me, I’d let the 5k slide but it’s the disrespect that you showed me and my team last night that makes me do this. Imagine leaving the venue at 1 am past curfew hours, Makarau ndio hao na sisi.

To cut the long story short even the 10k you paid me ended up going down the drain. Now I’m in arrears coz now my team also are demanding payment from me. What do you want me to do? Please Pay me..”