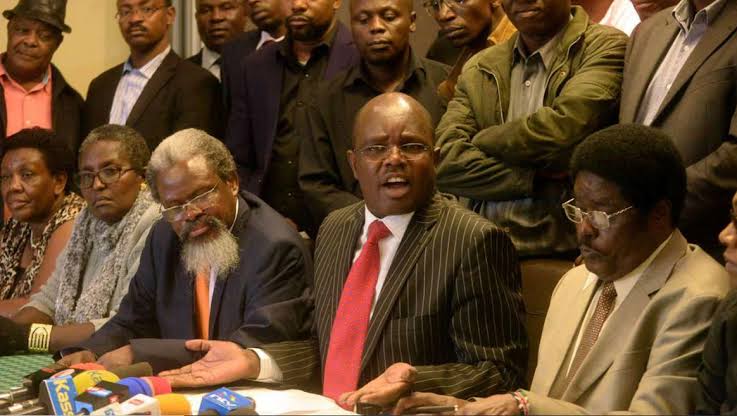 The government has appealed to the Universities Academic Staff Union [UASU] to give dialogue a chance to avert a looming strike within public universities.

University Education and Research Principal Secretary Amb Simon Nabukwesi assured UASU Secretary General Constantine Wasonga they are ready to engage with them in a consultative meeting.

He insisted the purported strike is not healthy to the country and cautioned them it will ruin the standard of education for youths.

“The country is still struggling with measures to contain the COVID-19 pandemic for the second year,” he argued.

Nabukwesi said education and learning were disrupted after the outbreak of the pandemic which the world has yet to come to terms with.

He spoke during the handing over ceremony of a renovated hall at the Technical University of Mombasa [TUM] in Mombasa county.

The University Education and Research Principal Secretary said it’s a matter of commonsense that learning was disrupted for a year during the outbreak.

Nabukwesi said out of the amount signed in the 2017-2022 collective bargaining agreement [CBA] the government has been able to disburse a down payment of Sh 6.6 billion.

He insisted the remaining amount in the CBA is Sh 2.2 billion after the 2017- 2022 agreement and has been factored in this year’s budgetary allocation.

“There is no cause for alarm as the pending amount will be released soon and it is already in the pipeline,” he assured the lecturers.

The PS said the delay is due to the challenges the country is facing due to the outbreak of the deadly disease.Nabukwesi, who was with TUM Vice Chancellor Laila Abubak and TUM Chairman Dr Robert Arunga said they had talks with the treasury ministry to end the stalemate.

He assured the union officials nothing will be lost as they will exhaust all avenues until they are paid.

The impediment over the Sh 8.8 billion salary deal is of great concern to the government after the seven day strike notice was issued.

Nabukwesi asked the public university councils to hold their horses and not withdraw their services at the learning institutions until an amicable solution is reached to end the deadlock.

He told journalists the Monday strike is unnecessary as the only step remaining to be carried out is to pay the outstanding balance.

“On Monday we will have a round table discussion with union officials to update them on the government development on their salary,” he pointed out