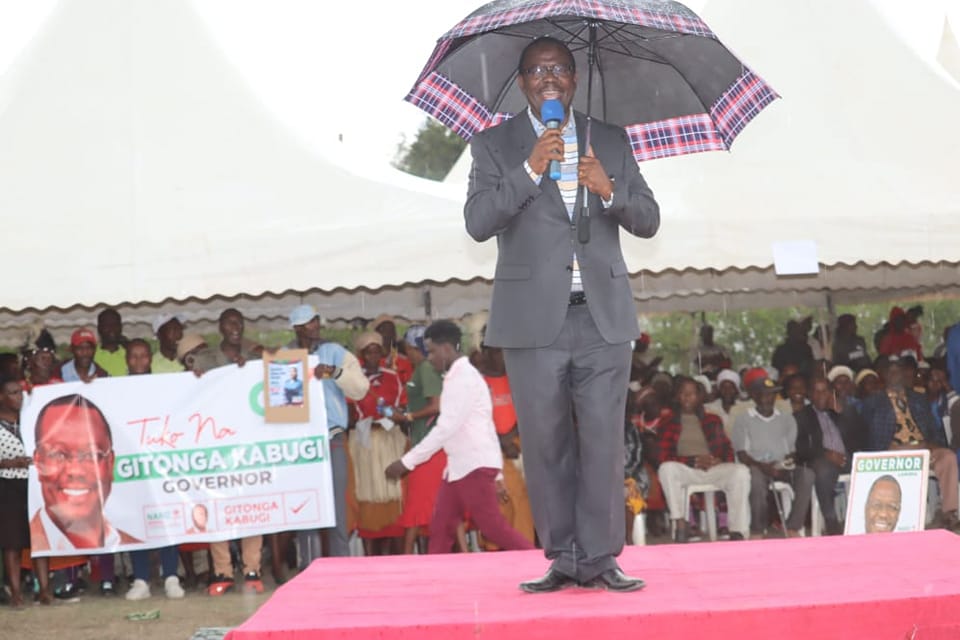 Laikipia Governor Nderitu Muriithi has a reason to worry as his rival Gitonga Kabugi is poised to be the next governor after being endorsed by several quotas.

The battle for the Laikipia County governor’s seat has heightened with seven candidates declaring interest for the top position.

The flamboyant former deputy governor has become the talk of the town after several aspiring MPs, MCAs, and church leaders promised to support his candidature.

Gitonga has been running well-oiled campaigns by sponsoring local youth and women in technical courses, among other empowerment and charity programs.

He explained that his move to join politics was informed by his urge to change the leadership of Laikipia County.

He explained that he plans to save thousands of youth who lose hope after failing to make it to university or college.

“We lose many youths who fail to further their education beyond Form Four. These are people whose potential needs to be tapped,” he added.

Gitonga has severally accused the governor of slow development and said, if elected, he aspires to make the semi-arid county a better region, attractive to investors.

Addressing residents over the weekend, Gitonga said he is the best bet for the county noting that the incumbent has been sleeping on the job thus letting his electorates down.

“I am the best bet for the county, I have the managerial skills required for the seat, and I request my supporters to elect me for better services and leadership,” he said.

Gitonga’s candidature appears to have caused a stir on the ground and social media with debate focused on the wealth on display courtesy of the high-end cars in his convoy; other aspirants are not leaving anything to chance.

Some analysts and residents, however, say Gitonga’s development track record will be the major determinant because he has a strong CV.

Gitonga is banking on his record as the pioneer deputy governor of Laikipia during Joshua Irungu’s tenure. He will face off with the former boss he is vying for the UDA ticket.

“We urge our people to avoid abuse as we campaign ahead of August. Simple minds discuss people but great minds discuss ideas. We should not entertain leaders who abuse others,” he said.

During a recent poll that was released by Mizani Africa, most of the people interviewed expressed confidence in Gitonga saying he has been keen on championing the interests of the county.

“We did a lot of interviews and the reality is that most people have confidence in Gitonga Kabugi. They see him as a brave man who can bring change in Laikipia,” Mizani Africa data analyst John Benson said.

The aspirant during a recent media interview explained that part of his empowerment programs includes sponsorship for students taking technical courses.

“I ensured there is a balance in the number of students sponsored across the wards. Many who have graduated with technical skills are now either employed or employers,” he said.