Blow to Nkedianye as Kalonzo rallies Kamba votes behind Lenku 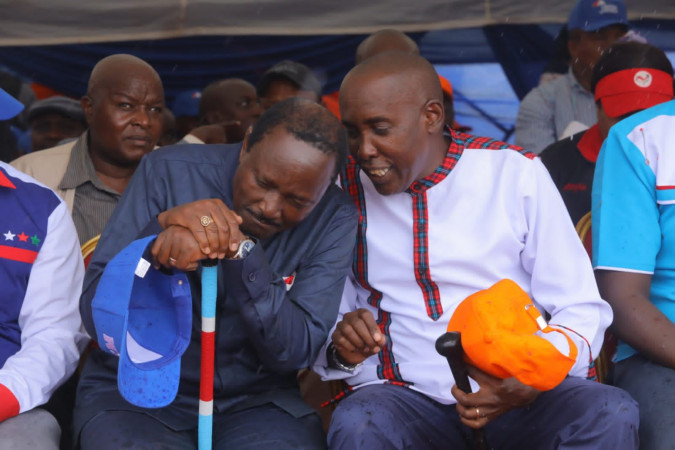 The battle for the Kajiado Gubernatorial seat took a new twist after Wiper Party leader Kalonzo Musyoka rallied the Kamba community in the county behind incumbent Joseph Ole Lenku.

The new development is a major boost to Governor Ole Lenku who is seeking to bag his second term in office.

Kalonzo trooped to Kajiado with a contingent of Wiper officials and  senators led by Enoch Wambua (Kitui) and Agnes Kavindu (Machakos).They  rallied the Kamba community and Kajiado Central Voters behind Lenku’s bid where they expressed confidence that the communities interest will be well taken care off.

Kalonzo decalred that Wiper will not field a candidate in Kajiado but will instead invest their trustin Lenku.

“This is the man of the moment and we are withdrawing our candidate so that we can all rally behind him,” Kalonzo said.

Lenku is also enjoying massive support from ODM leader Raila Odinga who is expected to tour the county when he returns from his trip in the United States.

Kalonzo announced that the Azimio La Umoja leadership has full confidence in Lenku’s leadership and that he will do everything possible to protect the interest of Maa people once the coalition forms government.

“It is not easy to defend sensitive matters affecting the community the way Lenku has done. He is a true champion of his people’s welfare. He needs to be given a second chance to finish his job,” Kalonzo said.

Kalonzo spoke in Ng’atataek when he led thousands of local residents to unveil Moses Birisha as the Wiper parliamentary candidate for Kajiado Central on Sunday.

On his part,Lenku welcomed Kalonzo’s support and vowed to support Moses Birisha for the Kajiado Central seat.

“Vote for Raila Odinga as President and support Moses Birisha to become your new Member of Parliament (MP) on August 9,”

Lenku said that he will continue working for the harmony and co-existence of all communities living in Kajiado.

According to local observers,bagging the Kamba vote will give Lenku a head start against his rivals as he tries to inherit and consolidate votes from the Azimio-leaning communities in the county.