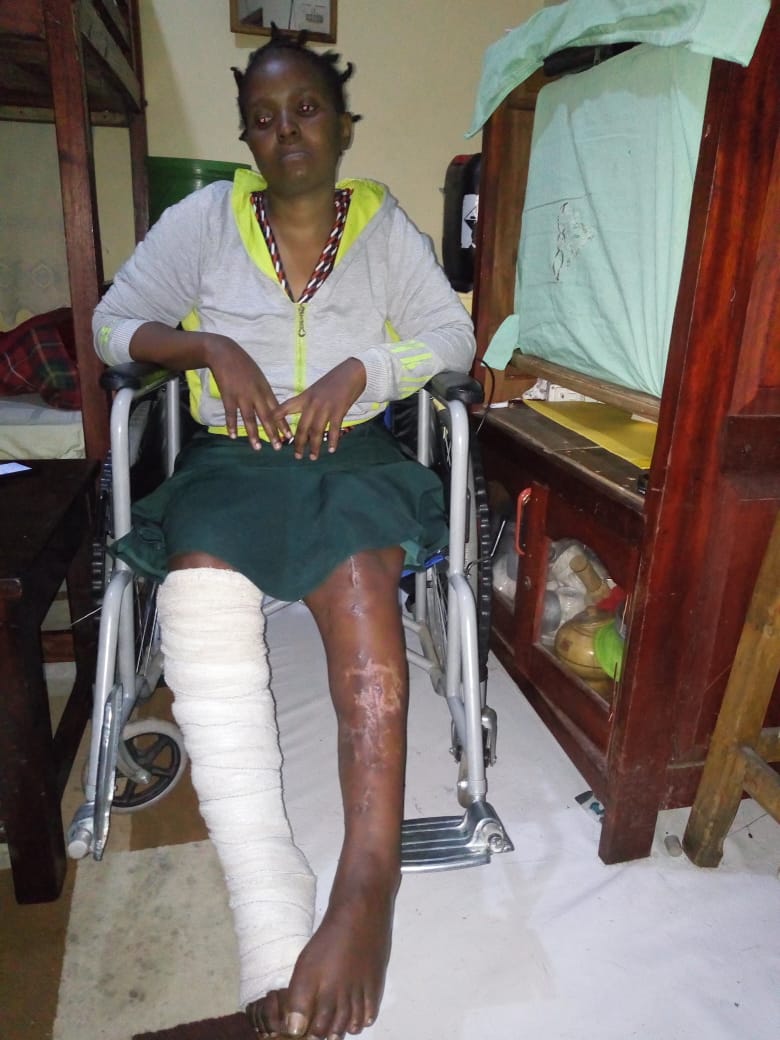 Divinah Maoto 37, a mother of three was leading a normal life when the worst struck.

Divinah lives in Mukuru Kwa Njenga slums with her husband Mr Jones Nyandege and their children.

Before the incident, she had been enrolled as a cohort in the famous Kazi Mtaani within her cluster.
13.10.2020, this is a date that will linger in her mind forever.

Divinah and Jones had attended a funeral of their relative in Makongeni, Nairobi when they decided to use Mombasa Road on their return journey.

There being no designated driver, a female conductor took to the steering wheel and drove them off.

On their way as they approached Capital Center the vehicle appeared defective, it didn’t take long before it was hit from behind by a trailing vehicle.

Their van swerved and landed in a ditch.

Divinah and her husband were in the back seat, the rim kept under their seat squeezed and broke both her legs.
The husband, Jones also sustained waist bone dislocation.

Though it was dark, they were evacuated by an ambulance to Kenyatta National Hospital (KNH) where they were admitted.

Jones got discharge after a one month stay but left his wife still bedridden as she had been seriously injured.
Divinah got discharged later though her legs require to be fitted with some metal plates which she has not obtained due to lack of funds.

The metal plates to be inserted in her legs require Kshs.150,000/ for easy recovery.

She is always in a wheelchair donated to her by a good neighbor.

She has been indoors all through.

Though the husband is a free man, he can only perform light duties and moves around hawking some clothing.
Divinah Maoto appeals to well wishers or any concerned leader to assist her get back to her normal life and fend for her three kids.

On her parting shot, she requested the Traffic Police and NTSA to thoroughly investigate the incidence and take firm action against the said Sacco to enable her get justice.