How Weholite Technology is helping to maintain Zanzibar’s beauty 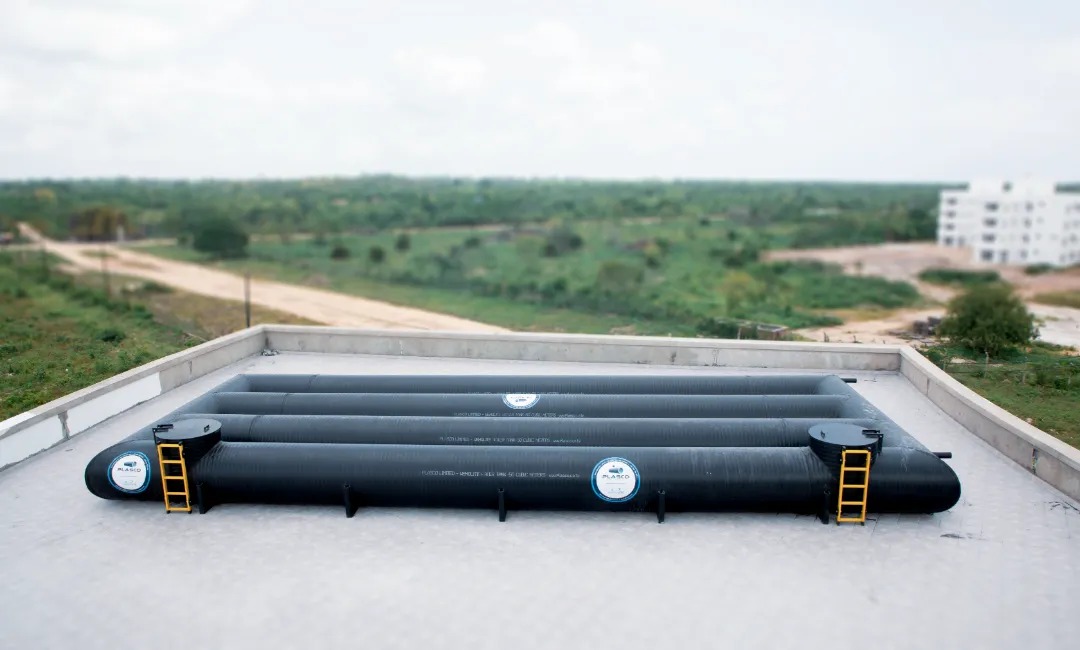 In 2015 CPS Live Ltd, a real estate developer launched Fumba Town, a modern African town in Zanzibar, the island that lies some 30km (just over 16 nautical miles) off the Tanzanian mainland.

CPS Live’s main objectives included developing modern units that did not compromise quality. Sustainability was another key consideration and to this end Fumba Town was to use as much locally available material as possible.

Fundamental to the whole construction was ensuring the landscape that had earned Zanzibar its dream destination status was maintained. However, ensuring Fumba Town’s aesthetics and the project’s facilities functionalities presented some engineering challenges, one of which was fresh water storage. How do you install tanks that will provide adequate potable water but not mar Zanzibar’s picturesque scene?

One of the project’s new retail blocks needed a 50,000 litre (50m3) rooftop tank to service the building with a large volume of drinking water.

A key requirement was that the Plasco team had to design the tank to fit into a restricted space. The tanks were not to be visible from the ground and as such were not to protrude higher than the 1.1m high bund wall around the rooftop.

“Zanzibar is one of the most scenic locations and erecting a forest of uninspiring tall vertical moulded or steel tanks would have been an injustice to Fumba’ Town residents,” said Plasco CEO, Ali Gulamhussein

Sustainability was also an important consideration for project’s developers and again this presented another set of challenges because the traditional building technology such as moulded plastic tanks and their steel equivalents would not achieve this desired result.

If the construction team went with the normal practice of using moulded plastic, several tanks would have been used, because they are only available in small capacity units. They also have a very short service life, are prone to leakages and can be easily damaged onsite.

Steel tanks on the other hand, are not readily available in Tanzania and again have lifespan and leakage vulnerabilities.

A solution that would resolve all these challenges was available courtesy of an innovative technology which is being pioneered by Dar es Salaam-based Plasco Ltd, the Tanzanian licensee for the manufacture of Weholite HDPE systems.

CPS commissioned Plasco to design, manufacture and then install the tanks on the retail building’s rooftop, making the choice to use Weholite HDPE technology a perfect solution.

Weholite HDPE pipes can be customised to fit in any area and in this case, they could perfectly fit within the retail building’s limited space and not cross the 1.1 high bund wall that had been set, ensuring that the project’s aesthetics were maintained.

Weholite technology has a service life of up to 60 years when installed above the ground which is far superior to the traditional alternatives.

“Weholite was perfect for the project because Plasco was able to deliver within a short period which was key for the client. By using this technology, CPS met all the necessary environmental and sustainability requirements,” said Gulamhussein

The tank was designed and manufactured at the Dar es Salaam plant in just a few weeks, then shipped to the Island, before being lifted into position, fusion welded and then pressure tested to provide confidence to the client. Installation was achieved in a week.

For its part Plasco says that Weholite’s design capabilities means that the system can be factory built, delivered, and installed in modular form and then assembled on site to store large volumes of freshwater. As demonstrated on this project, Weholite’s light nature means that it can be easily transported to remote areas.

“Weholite makes it possible to customise products which can then be easily transported and installed in areas that are difficult to access either because they are far or because doing so would disrupt livelihoods,” said Plasco CEO Ali Gulamhussein.

Plasco has also installed other large volume Weholite freshwater storage tanks, most recently, in Dodoma, Kigoma and Moshi, where a 300m3 version was delivered and commissioned in less than 2 weeks.