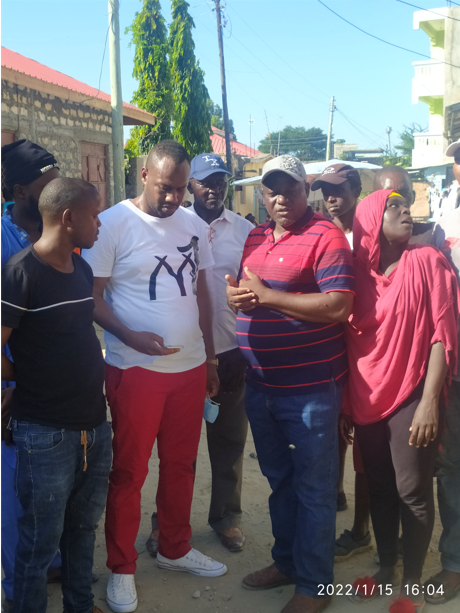 Almost 15,000 families at Kwa Bulo area in Nyali constituency in Mombasa county have been displaced from an 85 acres piece of land in an ownership tussle.

Mombasa businessman Said ‘Saido’ Abdalla  appealed to the government to come up with a permanent solution to the perennial land disputes in the area.

He added the constituents are suffering due to the perennial land disputes in the area.

‘’Let the government come up with an amicable solution to the land disputes in the area,” he said.

Saido said the move to demolish the residents’ houses and property worth millions of shillings will socially affect them.

He spoke when he showed his solidarity with the affected families during a media briefing held at Kwa Bulo in Nyali constituency.

The local politician said he is concerned with the perennial land disputes and urged the government to put the matter to rest.

Saido insisted that according to records at their disposal the land had no known owner for 15 years and wondered how the cash strapped Kenya National Assurance company came out to claim ownership of the land.

He pointed out the residents have been demanded to pay accumulated land rates failure to which they will be evicted.

“The threats have caused panic among the residents who are unable to pay the accumulated land rates due to the current financial constraints,” he pointed out.

The politician disclosed that the least a household  is supposed to pay to clear the outstanding accumulated land rates is Sh 1.6milion with the highest amount being Sh10 million.

Saido said there is confusion in the land ownership tussle in the area.

He wondered how the residents are expected to clear the accumulated land rates to an insurance firm which just came out of the blues to claim ownership of the land.

“The land ownership tussle has caused confusion among the residents who live in panic and fear,” he pointed out.

One the residents Aron Calango who has lived in the area since 2002  said they had moved to court with majority of those who filed the suit having died and buried on the disputed land.

He told journalists they have never heard of the insurance firm until 2005 when a local firm emerged wanting to buy the controversial land.

“The new land owner has already paid a down payment of Sh 8 million to the cash strapped Kenya National Assurance company against Sh 43 million,” he pointed out.

The local resident said the new land owner wants to move to the land and they are now supposed to vacate which is a contentious issue at the moment.

Calango said the firm moved to court in 2011 and won the battle and they are now supposed to vacate the land.

He said the government is aware of the saga since the area of was previously under the provincial administration.